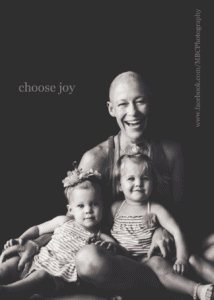 A 44-year-old cyclist, CEO, and mother of twin toddler girls, Phoenix, AZ native Victoria Cramer fought and beat the most aggressive form of breast cancer. She also ran a half-marathon, completed an 18-mile mountain-bike race, and hit a personal record (PR) in a 24-hour bike competition–all in the midst of 16 grueling months of chemotherapy treatments. She credits her extraordinary mental and physical resilience to an integrated healthcare strategy that blended naturopathic and allopathic medicine.

Victoria was referred for a biopsy nearly a year after discovering a lump on her breast while pregnant. She was a non-smoking, healthy-eating endurance athlete, and her doctors originally dismissed the lump as a clogged milk duct or benign cyst. But when her twin daughters were just 8-months-old, she received a diagnosis that knocked her off her feet: HER2-positive and estrogen-positive breast cancer—an extremely aggressive form of the disease.

Facing surgery and extensive chemotherapy, Victoria jumped into action, putting together a team and a strategy to attack the biggest challenge of her life.

In the three weeks after her diagnosis, she had 23 different doctor appointments and lab tests. But her meeting with Dan Rubin, naturopathic oncologist was “the single most pivotal moment in my entire strategy and battle against cancer.”

Knowledgeable about every aspect of her blood work, Rubin was the first doctor to clearly articulate how serious her cancer was and how aggressive she would need to be. He also understood how important it was for Victoria to be able to run and bike and chase her twin daughters around throughout her treatment. As a naturopathic doctor, he was an advocate for her entire self—body and mind.

Dr. Rubin quickly developed a treatment plan that would allow Victoria to meet all the goals she had set for herself. Specifically, the naturopathic medicine protocol would smoothly integrate with her conventional oncology treatment by:

As a result of incorporating naturopathic medicine into her cancer treatment, Victoria was able to:

Throughout the treatment, Dr. Rubin worked closely and collaboratively with Victoria’s oncologist to modify her supplemental treatments and address any side effects or issues that came up.

This April, Victoria marked her one-year anniversary of finishing chemotherapy. As of January 2017, she has no evidence of active cancer in her body. She recently celebrated her twins’ 3rd birthdays, is back at the helm of her strategic consulting firm, and is getting ready for continued bike racing.